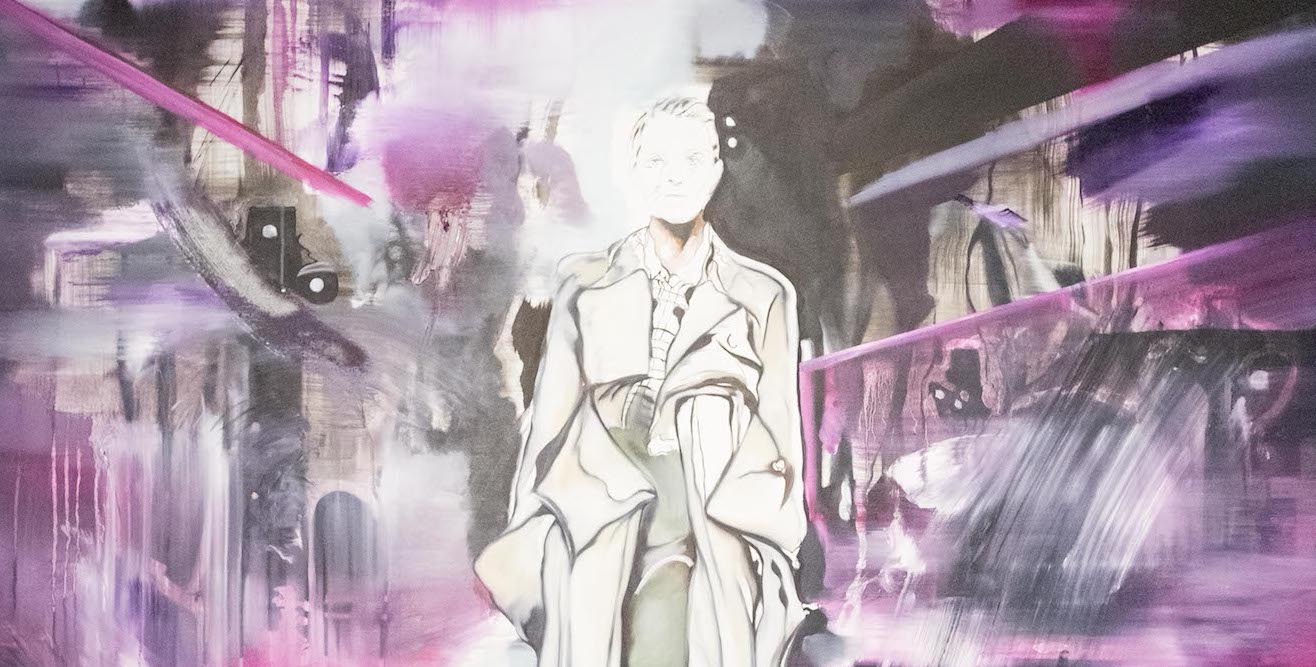 A classical handling of the medium of painting characterizes the work of Städelschule graduate Deniz Alt (*1978, Aschaffenburg, DE), which he intentionally does not supplement with performance, installation, the use of unusual materials, or digital intervention. Oil on canvas, impasto applied through an expressive gesture, this is how the artist, who lives in Frankfurt am Main, DE, presents his paintings of the past year.

In his most recent works Deniz Alt deals with the representation of the human being in different mixed worlds. The times of the pandemic have also strongly influenced the German-Turkish artist with Armenian roots. While in earlier works he investigated, among other things, the fate and cultural heritage of Armenians in the Ottoman Empire, he now devotes himself primarily to his emotional feelings.

Freed from his earlier work strategies - painting was often preceded by research trips abroad - Deniz Alt now tries to "let his mind come to rest," as he himself says. Upset and troubled by the consequences of the lockdown, the artist sets out to find new motifs and forms of expression on canvas. Forms and figures in his paintings emerge from a misty environment and explore empty space. Isolated, rarely in pairs, they set out on their journey. Stylistically, he follows the aesthetic of his previous paintings from the series The Heritage of Istanbul (2018). Also new is the varied color palette and his handling of oil paint. At points he applies these impasto. Already in his student days he dealt intensively with the material, even then he applied the colors thickly, almost in relief. Unthinned and with strong brushstrokes, he paints over the figures and interrupts his usual flow of painting. He himself says that this very intentional application of paint gives him support and forms an anchor for the figures and spaces. The depicted motifs do not float away from him in this way, as he finds himself experimenting in his painting just between letting go and holding on.

Waiting, pausing are also themes of his works. In times when travelling is severely restricted, he devotes himself to the theme of the city in the picture. The painting Großstadtgefühle (2020) expresses his strong affection for Berlin. While he often stayed in the vibrant metropolis in the period before the pandemic, visits have now become a rarity. Numerous architectural set pieces can be found in the cityscape. Only upon closer inspection can these be discovered. Deniz Alt has analyzed works by the great masters, such as Bernardo Bellotto (*1722 - +1780). Perspective, architecture, but also the social symbolism of places were decisive for the creation of the painting. Clubbers, scenes of a visit to the 1st May demonstration in Kreuzberg or a pair of lovers at the Brandenburg Gate can be recognized. The painting forms a central point in the exhibition.

Based on the depictions of cities, the fictional portraits create a background. People of different ages are grouped around the architectural works. One work in particular is The Queen (2020) which portrays a queer person. She_He clearly sets her_himself apart from society's cisgender heteronormativity. Deniz Alt's gender image was shaped in childhood. His mother worked for various fashion labels in Frankfurt, DE, developing patterns for customers in Milan, IT, and Paris, FR. The aesthetics of the runways were burned into his memory. Deniz Alt has unconsciously broken through this notion in The Queen. He drew a face with masculine features on the female-looking figure. For the artist, this feels right, so he did not complete it, leaving the fictional figure in a transitional world, so to speak. Viewers are thus invited to deal with the current gender issue.

He is also preoccupied with the theme of the extended family, likewise increasingly deviating from our social norms. The Family (2020) shows another break in his work and is an indication of the lived present. Coming from a Turkish extended family, Deniz Alt's familiar family gatherings also fall away. The distance to our fellow human beings and the dissolution into an absolute anonymity and into individual ways of life are especially noticeable in his hometown Frankfurt am Main. In 2016, the financial metropolis was dubbed the city of singles. Restrained gatherings of people, hidden by a gentle veil, are shown in the longitudinal rectangular painting. Reaching for the fictional characters takes a lot out of the artist. Many represent figures his own age. He compares them to himself and describes this as an empirical self-exploration. This also offers a very intimate look at the emotional life of the artist.

The figures in his paintings are border crossers and refer to the present. Slowly they move towards the viewer, partially dissolving, but advancing resolutely and with a self-confident look. They deliver us the message of the artist, who wishes that we all change our future together positively. 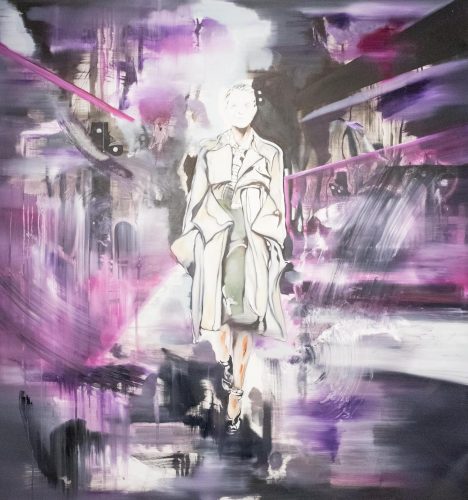 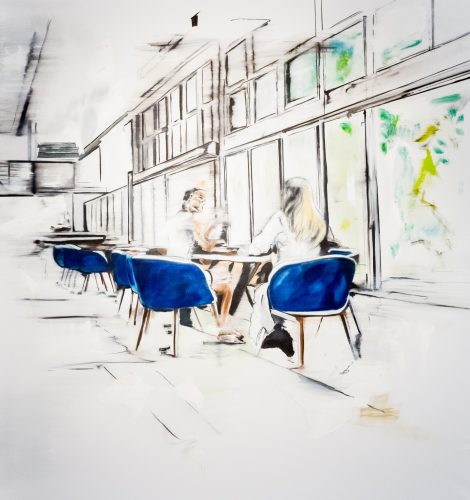 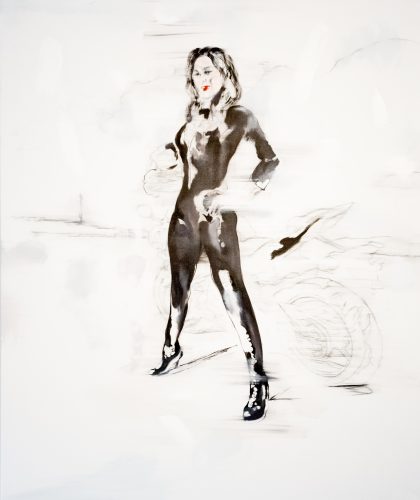 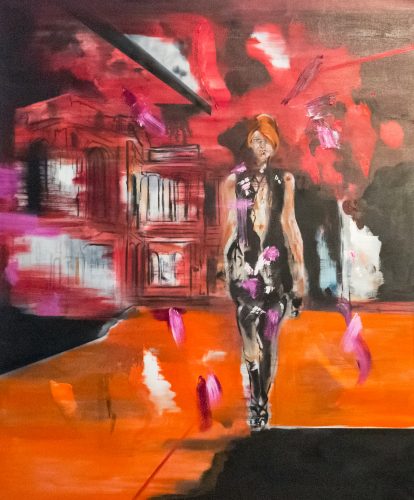 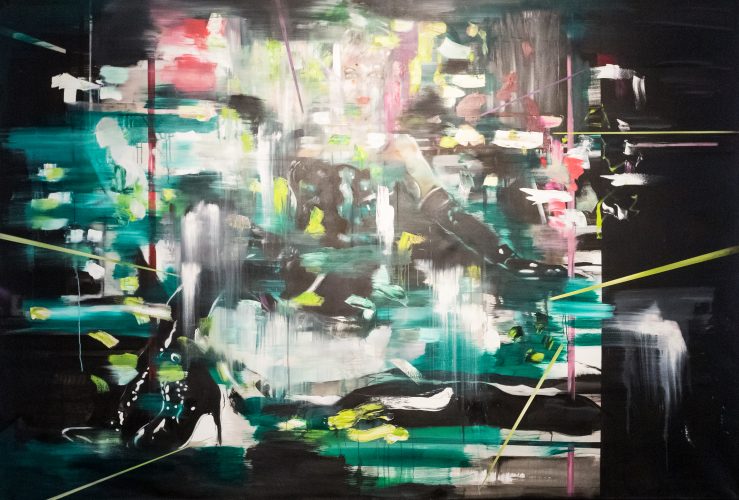 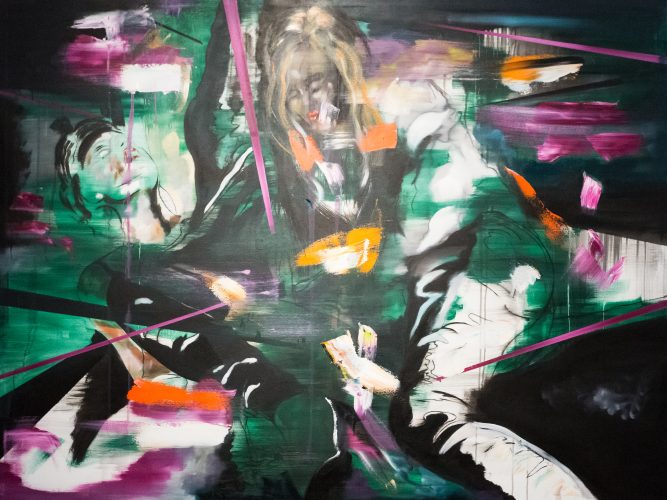 Divas by the riverside » 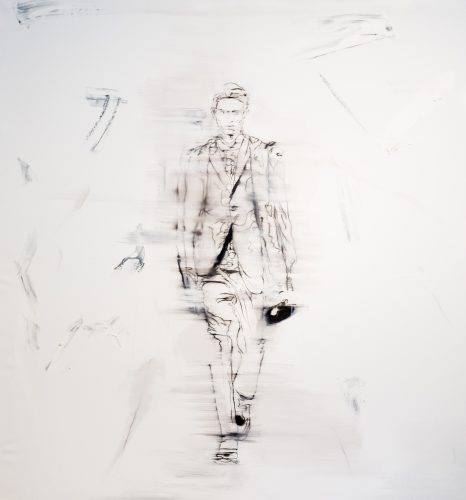 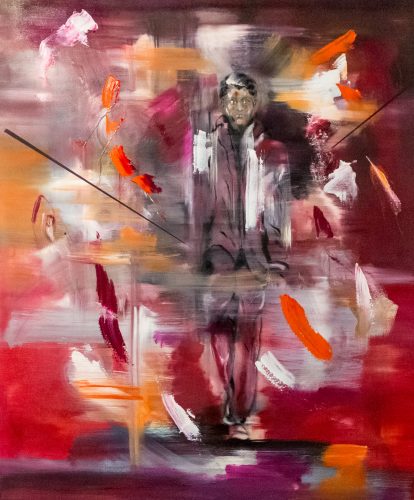 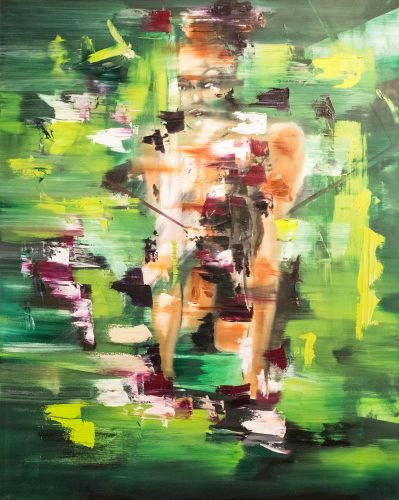 A muse in green » 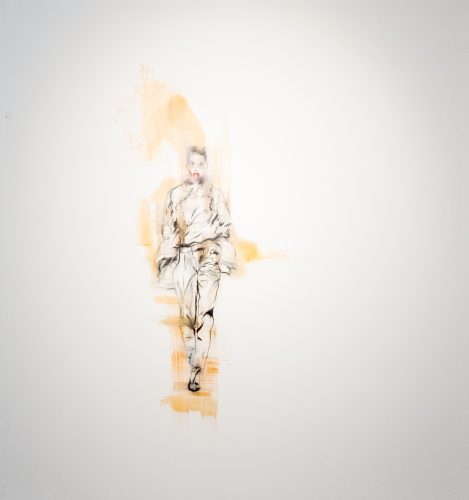 Study in yellow and orange » 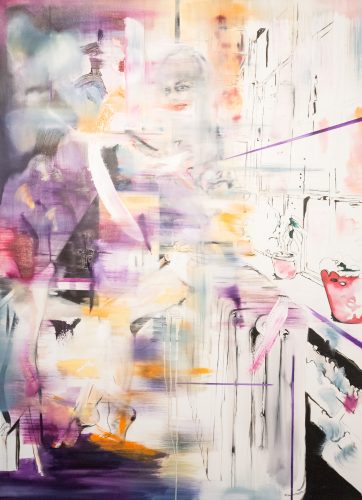 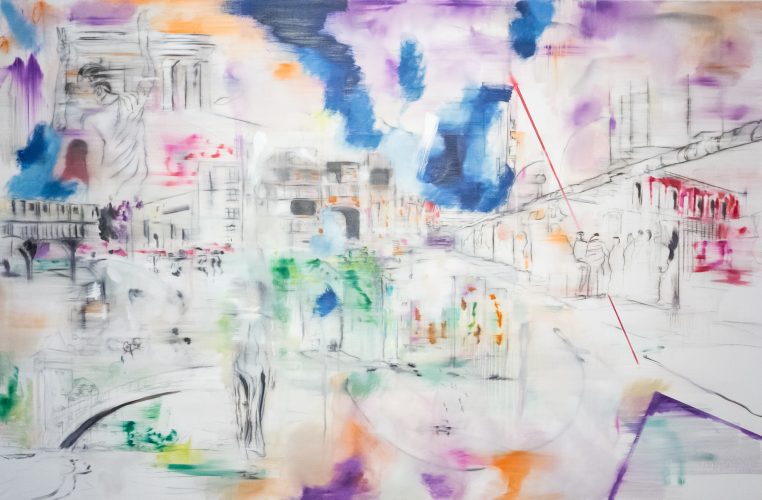 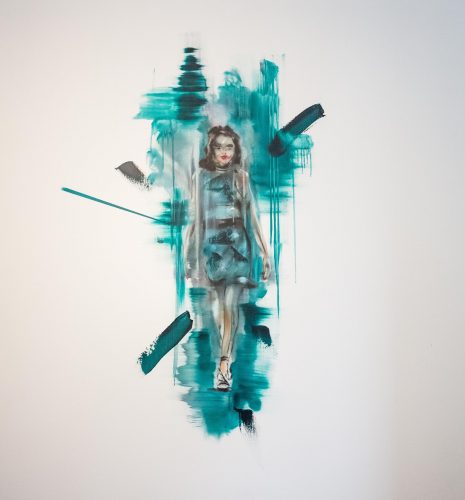 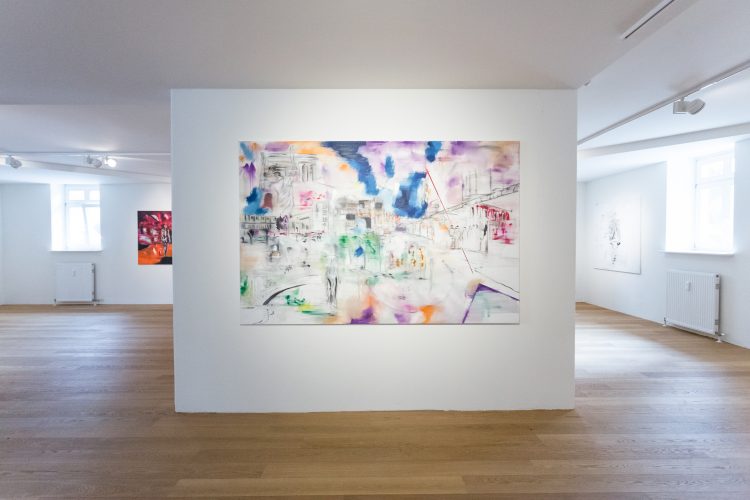 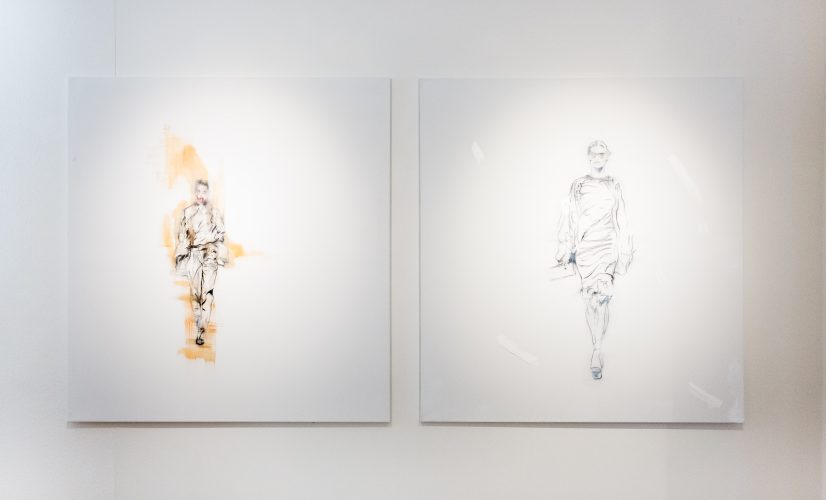 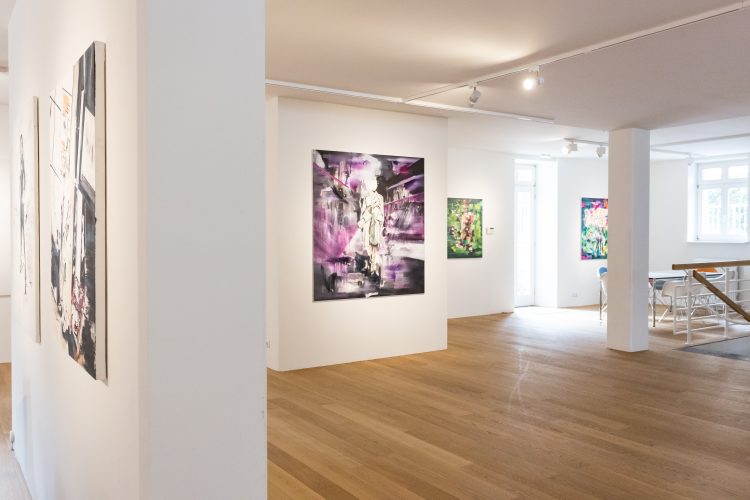 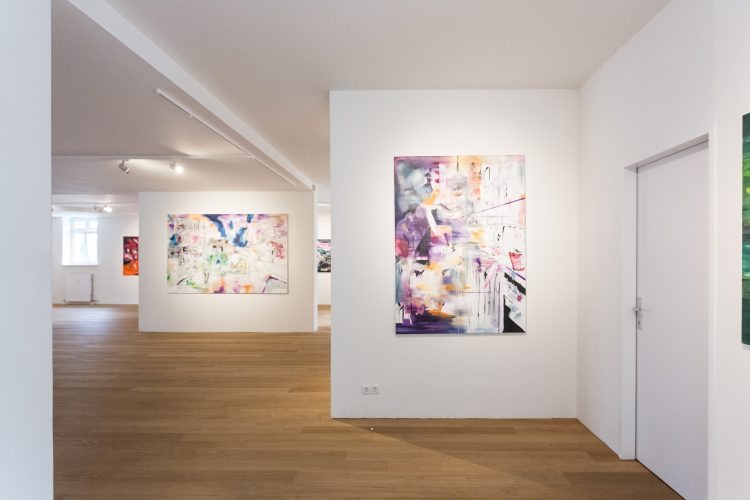 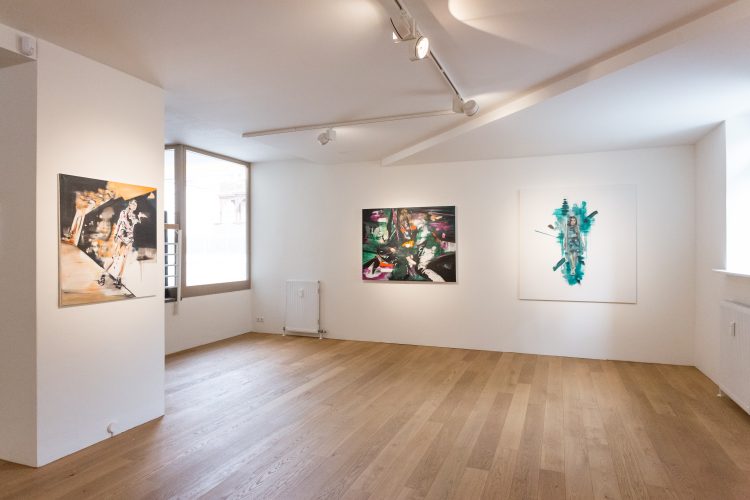 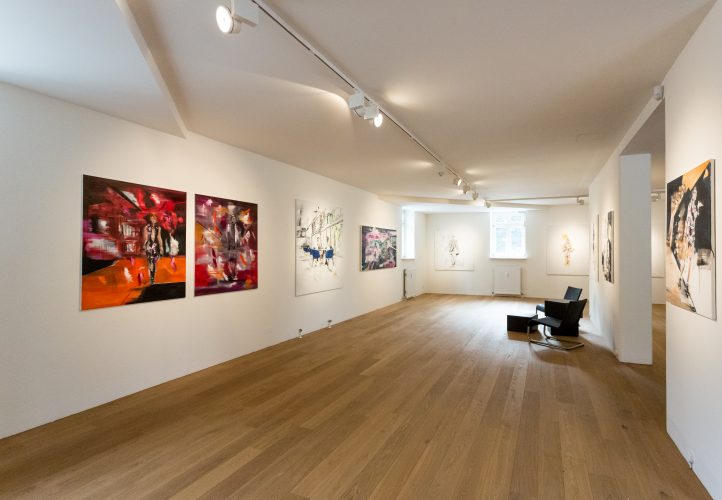