Heard on the Street

Heard on the Street

The works of 3Steps have developed from Mural Art and Street Art. The collective paints colorful neo pop images on facades and murals as well as several kinds of paintable media in the studio. The body of work of 3Steps contains mural art, street art, paintings on wood and canvas, photographs, screenprints as well as sculptures and installations. Most of the mixed media paintings consist of a collage of newspapers, magazines, photographs, stencil works, spray paint, acrylic, resin and screenprinting on wood and canvas.

Today‘s style of 3Steps includes influences of street art, style writing, photorealism, printmaking and pop art. In its current works 3Steps reflects today’s life, characterized by varying environments from reality, fiction, media and fantasy. The works are colorful imageries in which aesthetics and glamor melt into urban culture and adventure. The collective further debates the transformation of ordinariness and urban space in aesthetical glamour, as shown in the telephone series of the collective.

3Steps was founded in fall of 1998. The work of 3Steps can be found around the entire globe and was published in several international books and magazines. The members of the collective studied in Giessen, Zurich, Darmstadt and Oestrich-Winkel. After completing their university studies with diploma and award-winning PhD, the three friends founded their studio and art space in Giessen in 2012. Since then they devote themselves to new content driven topics and projects.

The collective has been awarded several times. In November 2014 3Steps received the “Kultur- und Kreativpilot Deutschland” (Cultural and Creative pilot of Germany) award by the Federal Republic of Germany. In the summer of 2015 a main project of the collective was funded by Department of Science and Arts of Hesse (Hessisches Ministerium für Wissenschaft und Kunst). 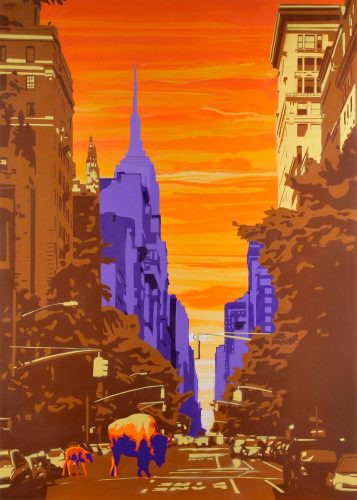 Heard on the Street – Triptychon »
We use cookies to ensure that we give you the best experience on our website. If you continue to use this site we will assume that you are happy with it.Ok