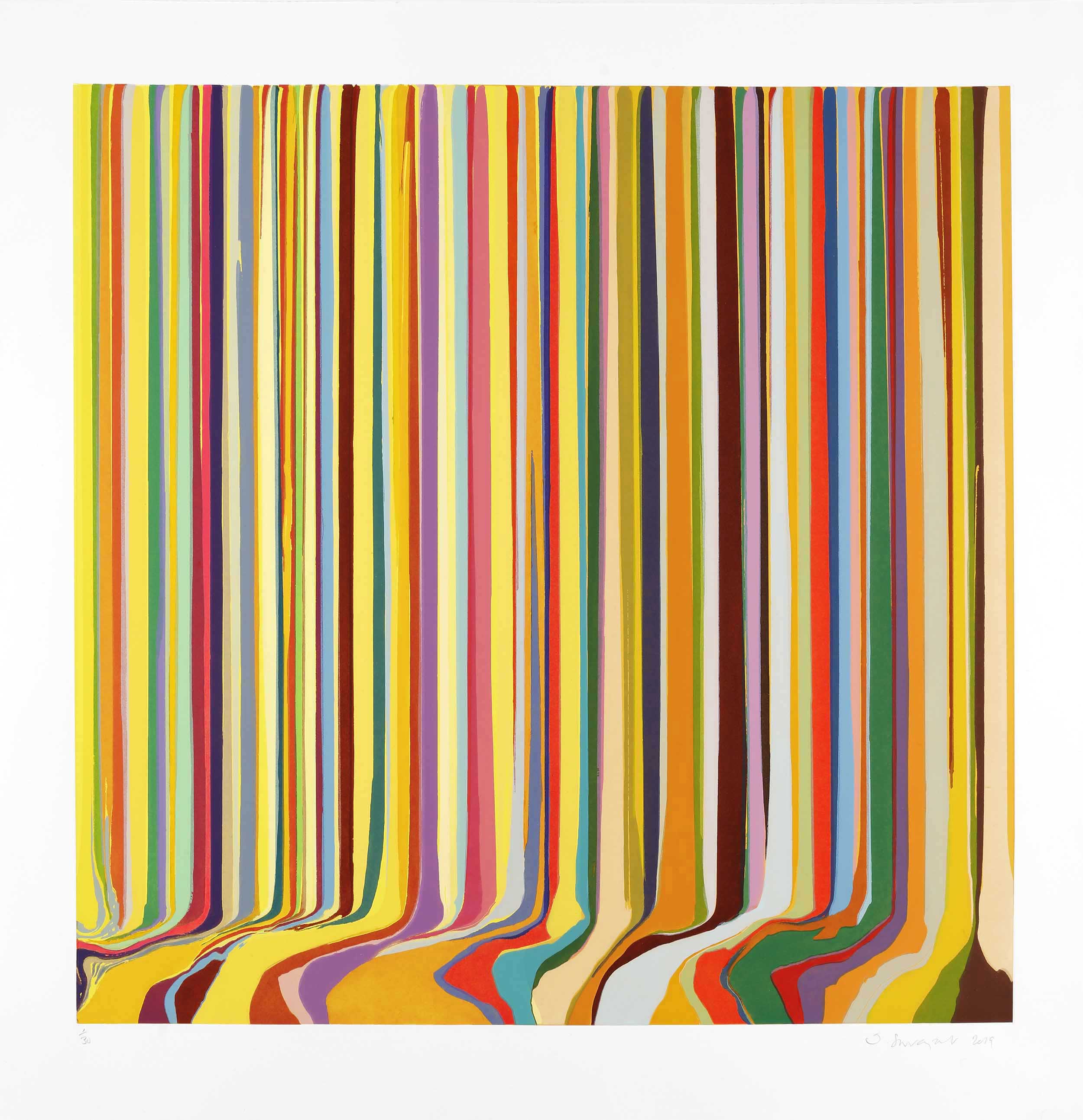 In his solo exhibition COLOUR EXPLOSION, the exceptional British artist Ian Davenport presents a selection from his extensive oeuvre of prints. The exhibition focuses on etchings and silkscreens from the past 20 years as well as three drawings and one painting from his personal archive.

Ian Davenport is known for his minimalist-aesthetic formal language. His so-called "puddle paintings", whose colours merge into puddles at the bottom of the picture, have become icons, and not only after he installed them in the Swatch Pavilion at the 57th Biennale di Venezia in 2017.

“The technique of puddle paintings allows me to precisely control the fluidity,” Davenport explains in an interview in Salzburg in the summer of 2013. When the internationally renowned artist himself talks about his works today, he is primarily concerned with the technical challenges and the interplay between meticulously planned colour compositions and randomly occurring results in the artistic process.

In 1988, the year he graduated from the famous Goldsmiths College, Davenport took part in the retrospectively acclaimed exhibition Freeze. The show, curated by international art star Damien Hirst (*1965 Bristol, GB), made art history: The Young British Artists debuted. After that, Davenport’s career took off. In 1991, he was nominated for the renowned Turner Prize, and in 2003 he produced a thirteen-metre-high “Puddle Painting” for the exhibition Days like these at Tate Britain in London.

The highlight exhibition in this year’s Salzburg Festival Summer 2021 shows 27 outstanding works. Among them are the painting (Circle Painting (Turquoise), 2002) and three rare acrylic paintings on paper (Black Lines on white paper, 1996, as well as Poured Lines “Yellow” and Poured Lines “Signal Red”, 2006-10) from the artist’s personal archive, as well as the latest etchings and screen prints. The exhibition tour begins with the three works Colour Splat Fizz, Colour Splat Bang and Colour Splat Wallop (2019). The motif of colour bombs shot onto the image support was created after a workshop with children in his studio and was translated by Davenport into the technique of screen printing. His early works are illusions of simultaneity, they are instantaneous sensations that then give way to closer inspection. Only then does Davenport’s precise painting, drawing, printing become comprehensible. He navigates, controls and directs colour. Davenport is an artist who investigates and places great value on experience.

The moment of randomness is an important factor for Davenport. Davenport’s painting Black Lines on White Paper from 1996 shows his experience of experimenting with colours and their random course. The unique work comes from the artist’s personal archive. Davenport controls the colour gradient on the picture carrier paper by applying the black paint to the upper edge of the sheet with the help of syringes and letting it flow down vertically. Through his precise knowledge of materials, he creates enormous freedom in his experimental working process.

The shape of the circle, with its continuous, aesthetic proportion, also offered the artist much scope for study. Davenport says about himself: „I have never really thought of myself as a painter, more as a sculptor who makes paintings“.(1)

From the mid-1990s Davenport worked intensively with geometric forms. Inspired by his trips to his studio in East London, on which he had to pass through the Rotherhithe Tunnel, he created his so-called “Arch-Paintings”.(2) These are based on the shape of the arches of the tunnel (constructed in 1904-08). This resulted in Davenport’s six-part silkscreen series Ovals (2002), which shows the geometric shape of a circle in six different colour variations. The series coincides with his “Circle Paintings” (2001-06). The colours of the individual circles sometimes deviate minimally or, on the contrary, form strong contrasts, such as that of the black circle on the white, square ground. The colour of the image medium is matt, while the circles are printed in high gloss. Davenport’s Arch and Oval series are inspired by the early work of Ellsworth Kelly (*1923, New York, USA – 2015, same place) White Plaque: Bridge Arch and Reflection(1952-55) from the collection of the MoMa in New York. In this collage on white paper, the US painter and sculptor reflects two matt-black semicircles, glued together by a narrow, black, high-gloss strip.

Another high-quality work from this group of works is the painting on fibreboard Circle Painting (Turquoise) from 2002. Davenport uses high-gloss household paint here for the first time. The geometric figure of the circle is inscribed on the turquoise-grounded MDF board. For this purpose, the board is clamped in a tiltable frame.Davenport then pours highly concentrated paint into the centre of the square. After the paint has been distributed concentrically, the picture surface is rotated once by 180 degrees so that the paint can flow off evenly. Small drips and runnel marks bear witness to this work process, which Davenport pushes to perfection.

The representation of repeated geometric forms entails the abandonment of thinking about elaborate motifs and led Davenport to his interest in colour scales and their precise and complex studies. Studies of Old Master paintings and their colour composition followed from 2010, with Davenport transposing the colour palettes of classics by Hans Holbein the Younger (*1497, Augsburg, DE – 1543, London, GB) and others in his well-known manner of stripe paintings. Appropriation, i.e. the appropriation of motifs in art history, was inspirational for this. In 2019 and 2020, Davenport will be working on colour and light studies of the day and the seasons, such as the etchings Spring, Summer and Winter, from the series The Four Seasons. The impressive series Diagonals was also created in 2020. The prints were etched on the same copper plate in different combinations of foreground and background colours. Based on this, he produced monoprints, such as 6 am Ghost or 7 am Ghost. The pale, pastel-coloured one-off prints are called “Ghost prints” because the copper plate was not dyed again after the actual series was printed, but was used directly for an independent print.

Between 2006 and 2010, he created the two unique pieces Etched Lines: Thirty Four and Thirty Six. At the beginning of the millennium, Davenport was already testing new techniques and methods to speed up his artistic creative process, as he could not realize his ideas fast enough for himself. According to Davenport, he was producing about 20 oil paintings a year at the time and compared this amount to that of Pablo Picasso, who often completed an oil painting in one day. His striped paintings refer to art historical models from British painting. Abstract-looking lines can already be found in watercolours by J.M.W. Turner (*1775, London – 1851 ibid.) in which he painted atmospheric light phenomena in nature.(3)

Ian Davenport’s prints and unique works on paper have a high intensity of light and colour. The production of etchings and screen prints brings with it a versatility. The most diverse variations, in colouring or in the choice of paper, can be realised. Colours and colour combinations dominate Davenport’s artworks, whether gigantic colour columns that merge with the ground, as in his puddle paintings, or the great contrasts of the individual colour stripes of his prints leave a lot of room for viewers. 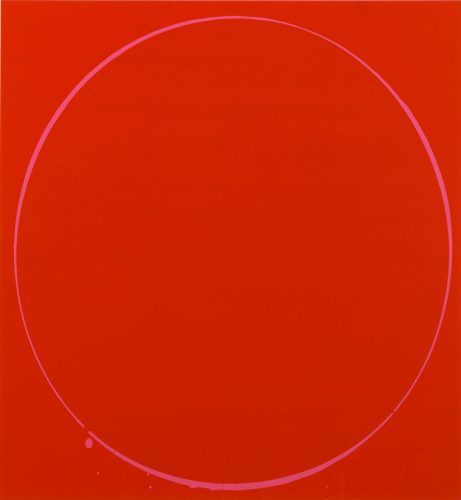 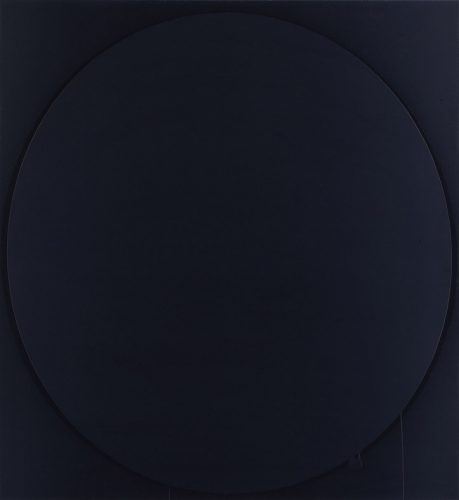 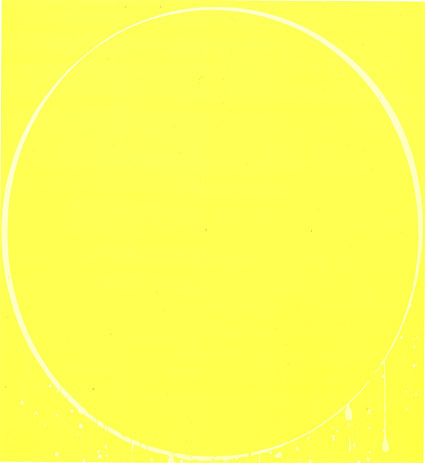 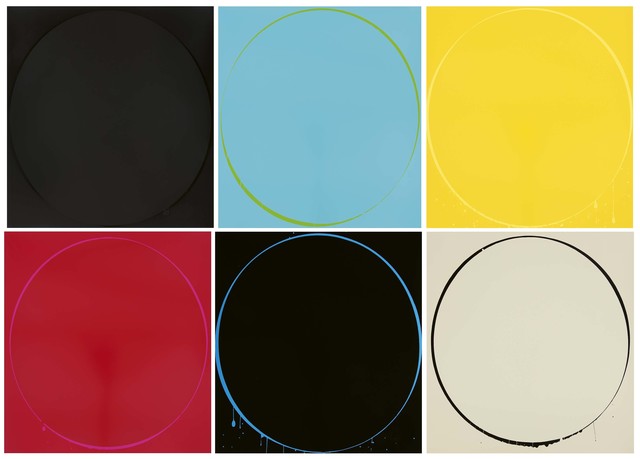 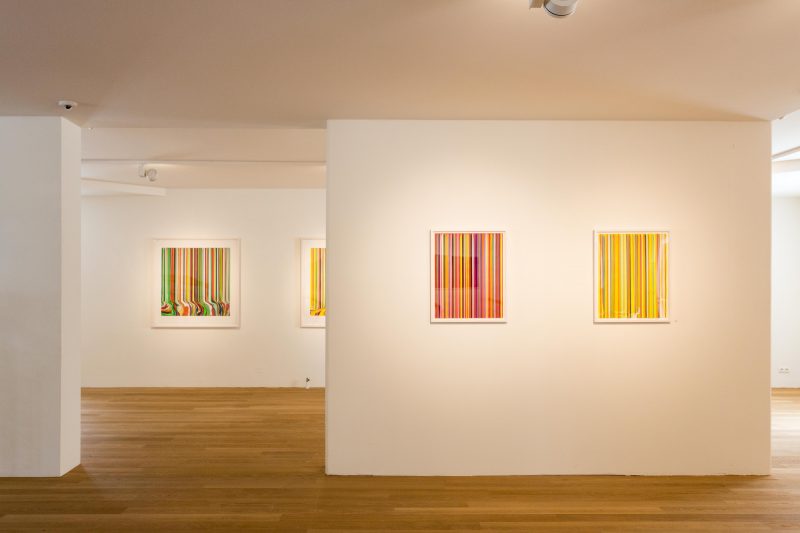 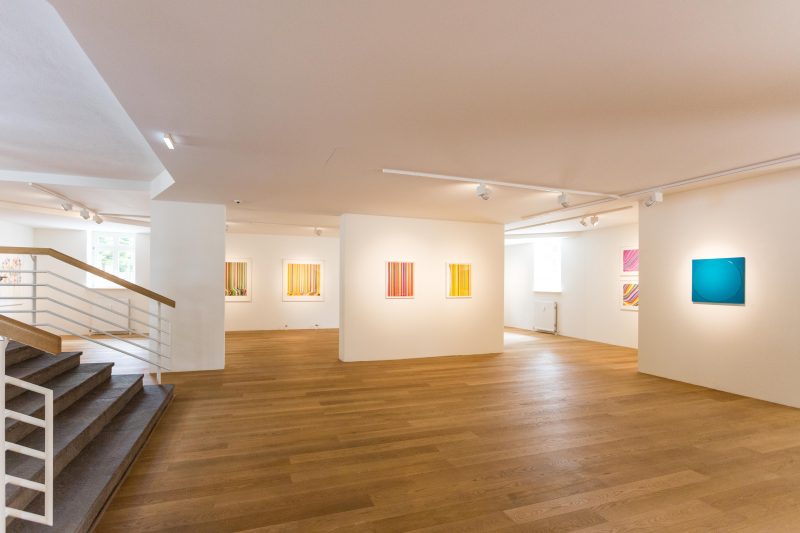 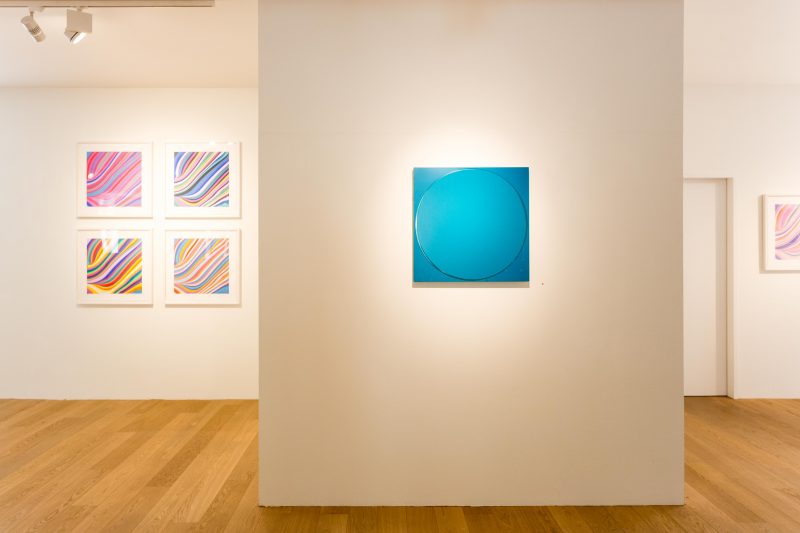 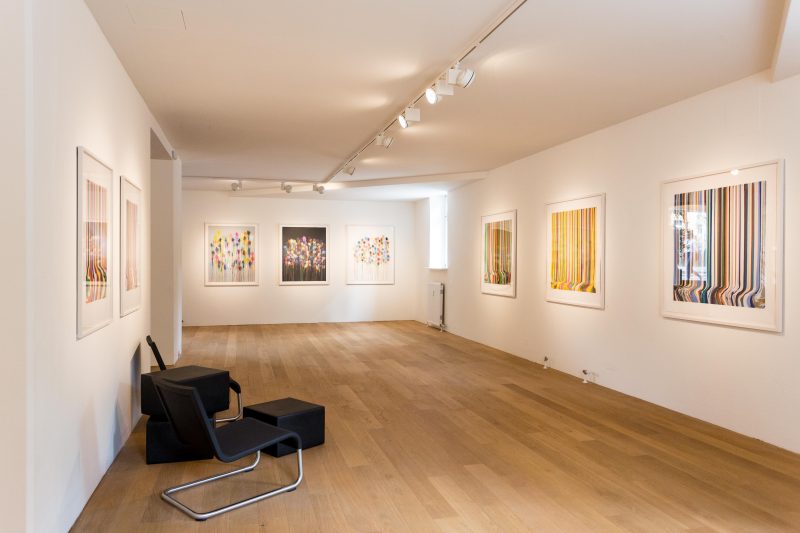 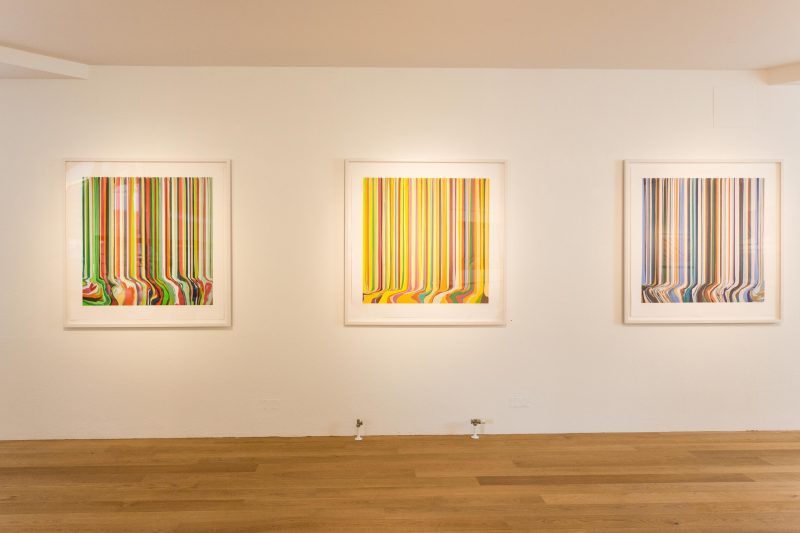 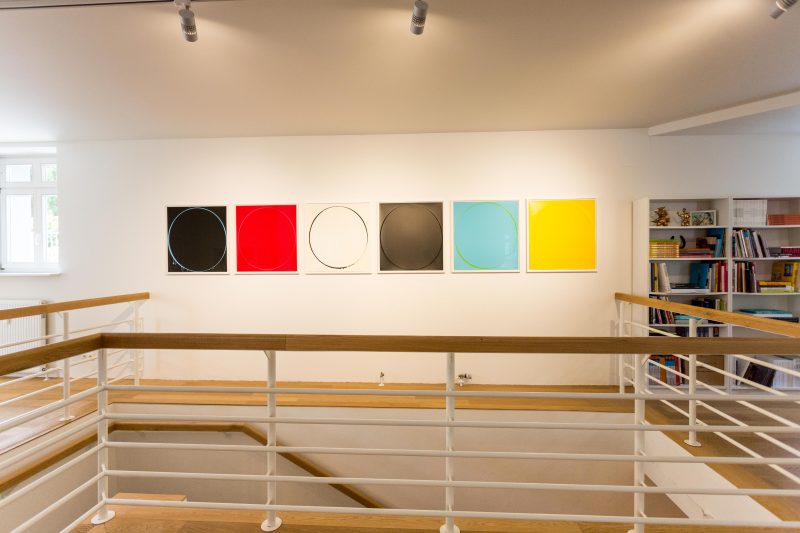 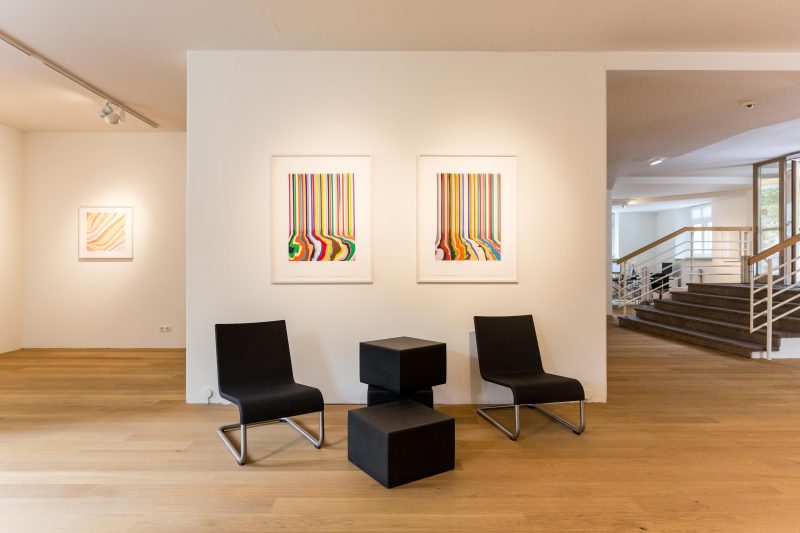 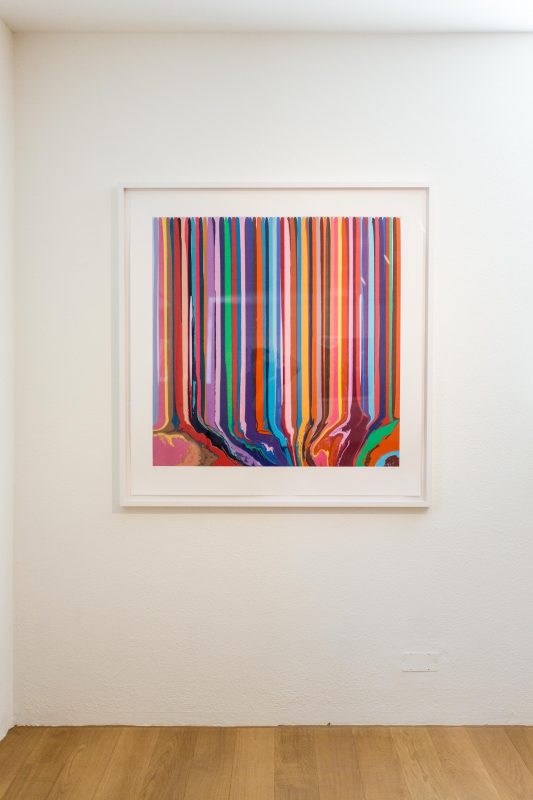