Römer + Römer, that is Torsten and Nina Römer, a married couple resided in Berlin, met at the Düsseldorf Acadamy of Art, where both were Master Students of the famous painter, graphic artist, and sculptor A. R. Penck (1939-2017). They have always worked together since 1998 to realise their artistic visions. Nowadays, Römer + Römer are internationally known for their independent and distinctive position in the art world. In combining digital photography and analogue painting techniques in their artistic approach, they developed a design language of their own that became representative of their personal brand. Their paintings are based on photographs taken on their journeys to various festivals. In a series of many small steps, these photographs are then digitally processed in post, at which point details in the pictures are analysed. Based on this, the couple wants to illustrate the rise in importance of visual media for the 21st century and of the multimedia world, progressing from photography to video and then the internet.

The extreme closeness to the portrayed scenes is immediately noticeable when examining the couple’s large-format paintings. The work begins with identical brush strokes on the left and right side of the canvas. Every single picture emerges from many overlapping layers. This procedure takes many hours, during which time, Römer + Römer work in a highly concentrated manner and with extreme precision. First, they apply a broad base coat, then they paint with more accuracy; paint is added dot by dot, pixel by pixel. When viewers move back and forth in front of the large-format panel paintings, they may have the feeling that the naked eye experiences a zooming effect, through which they become familiar with and easily comprehend this special technique.

On their journeys since 2008, the couple aims to investigate social and cultural contexts of our rapid globalised and digitalised world, and society’s ambivalent wish to live unconventional lifestyles in temporarily existing parallel worlds. Also, political gatherings like protests have become topics of their paintings. For the two series displayed in the exhibition House of Enlightenment, currently on view in Salzburg, for which 21 paintings were selected, the couple was inspired by two major happenings: the Fusion Festival and the Burning Man Festival.

The Fusion Festival (Cyrillic ‚ФУЗИОН‘) was initiated in 1997 and has attracted about 70,000 people for several years now. The festival could be described as “five days of ‘holiday communism’” on a vacant soviet military airbase in the German state of Mecklenburg-Western Pomerania. First and foremost, Fusion is a music festival, but there is also room for all kinds of cultural events like performance art, dance, theatre, cinema, public readings, light design or political events. Social boundaries, standards, and ideas of self-determination are explored. For the sixth time in a row, Nina and Torsten Römer visited the festival in 2019 to complete their research. They created works which capture the milieu, the social environment, and the collective thought, as well as the exceptional state of the festival community. The two of them always take their personal impressions into account and create images of the emotions that arise in the public. The pictures’ topics reveal an image of the atmosphere that is created by the parallel society during the five days that the festival lasts. Two pictures for the series capture all the aspects stated above: Luftschloss (‘Cloud Castle’; 2016) and Chill Out zur Geisterstunde (‘Chill out at witching hour’; 2015). While the first picture depicts the dancing and celebrating participants in front of a dome lighting the night sky above the party, the second shows a resting man leaning against a ledge of a wall at the bottom right edge of the painting. The composition creates tension: three quarters of the canvas are illuminated by lamps and colourful lights, whereas the lower left area is slowly submerged in the dark of the night that gradually becomes blurred with the orange-gold glimmer of the enlightened areas.

In the desert of Nevada, USA, however, the Burning Man Festival has taken place every year since 1990. It also attracts some 70,000 people, which for one week enrich the spectacle through art installations, performances, happenings, concerts, rituals, through their personal ideas or ephemeral and technically elaborate sculptures and art cars. The art festival incorporates many tendencies and approaches of Fluxus, Happening, or Land Art – art trends that were able to develop well in the USA of the 1960s and 70s due to technical progress and economic growth. The festival community translates their concepts and wishes into a global and futuristic utopian 21st century art language while using tools of technological progress, creativity and self-staging.

All paintings of the Burning Man series address the vivid impressions Römer + Römer gained from participating in the festival in 2017. By night, the desert changes into a world of illusions lit up by hundreds of light sources, light installations, and bonfires. This sea of light has had a huge impact on Römer’s + Römer’s works. With their compositions, the couple manages to capture moments of people wrapped in strings of light, and vehicles elaborately decorated with luminescent LEDs – all of which perfectly fits the couple’s pixel-like painting technique. The title of the exhibition comes from the painting House of Enlightenment (2018) which impresses with colour, motion, and the play of light. Römer + Römer are able to capture the ‘space-like’ atmosphere of the nightly spectacle. In the centre of the round painting, which is 120 cm in diameter, there is an installation that reminds of an UFO. The so-called ‘House of Enlightenment’ is a luminated sculpture of about 5 meters in height and is depicted here in the middle of the Tondo. The LEDs attached to the sculpture can be controlled by the festival participants. Römer + Römer were also interested in these interactive and participatory aspects of each sculpture. Many other fascinating nocturnes have been created, for example plain titled works like G (2018) or LED Bus (2018), which show the light sources of the artificial and futurist world of the Burning Man Festival. The square painting Art Car Skeleton (2018) shows one of the many art cars which are made with a great passion for detail. The rear end of the avant-gardist car is reminiscent of a spaceship or a rocket and takes up the space in the centre of the painting. The painting titled Moon Landing Biker (2018) is six meters wide and 2,30 m in height and is made of two canvases. It impresses the viewer with its dynamic regarding structure and composition: Starting from a cross of blue laser beams projected to the night sky by a laser show, the middle horizontal level is occupied by a dancefloor with a DJ and the dancing crowd. In the foreground of the scenery, at the bottom edge of the canvas, a cyclist moves, as if leaving the painting. The tricycle with the US-American flag is the main motif in this composition, because at Burning Man even bicycles are extravagantly designed and seem to be little sculptures themselves with all those little lamps and light chains.

With meticulousness and dedication Römer + Römer work on their paintings, which tell of changes in perspective. Through their special painterly compositions, the couple has developed their own style. Emotion is conveyed through colouring, which makes it possible to understand their paintings in a sensual manner. By transferring photographs into a so-called ‘pixel-style’, Römer + Römer explore possibilities of painting in general and contemporary modes of perceptions in particular. Their works provide insight into collective states of exception. Römer + Römer are historical painters capturing our digital century as well as exuberant event culture through transferring scenes of our contemporary life in the format of classical panel paintings. Hereby, they contribute in their own, distinctive way to the perception of art as a projection surface of utopia and models of society. They concentrate the most important aspects of cultural events in only one particular moment. The stories of their paintings tell us of subcultural happenings and utopic celebrations, of community spirit and the desire for freedom.

The artists will be present

Book to the exhibition 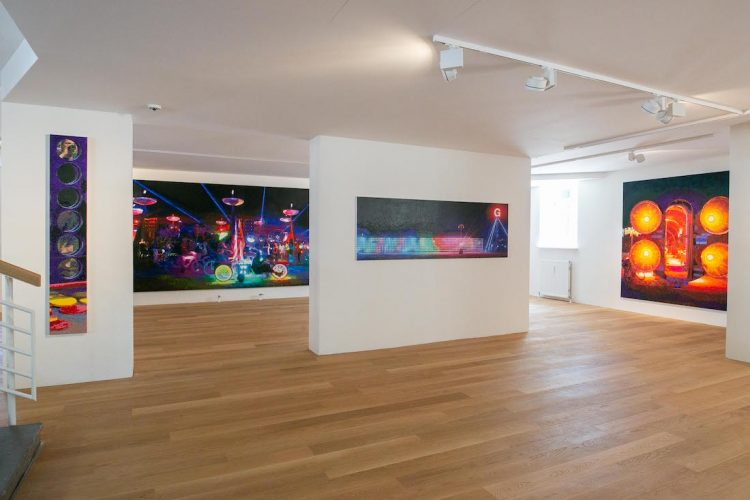 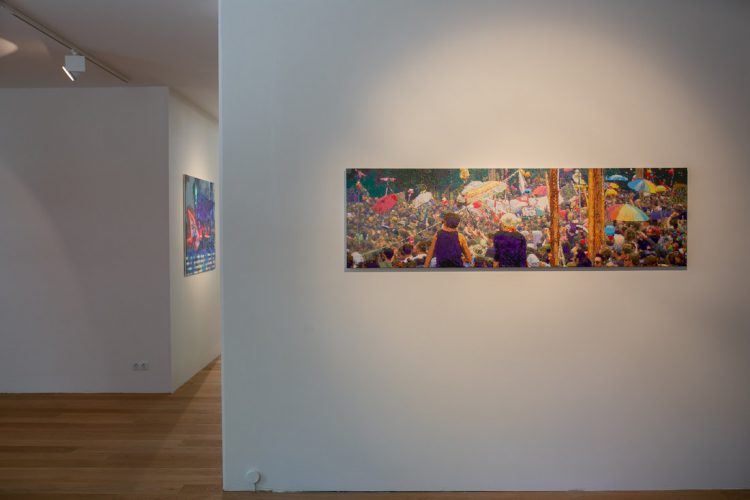 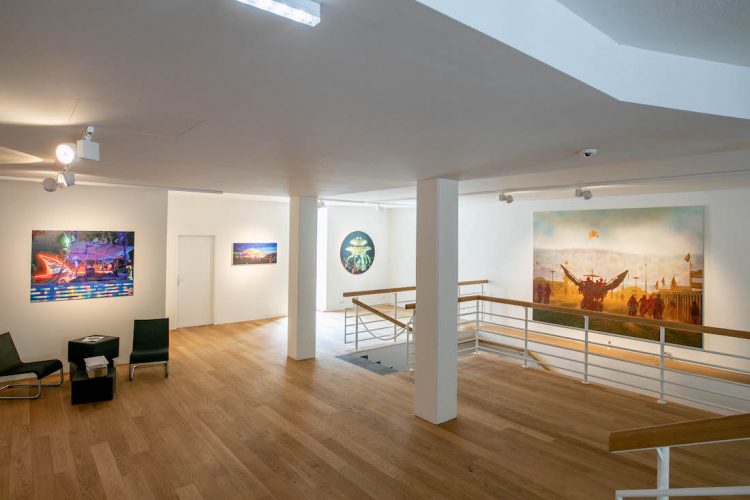 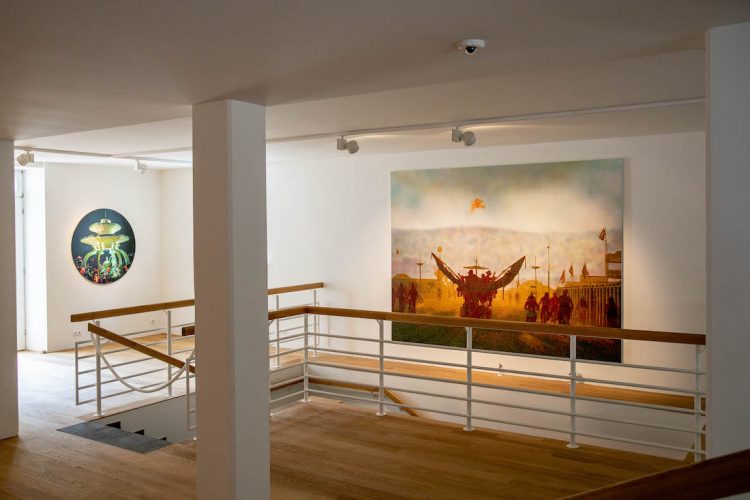 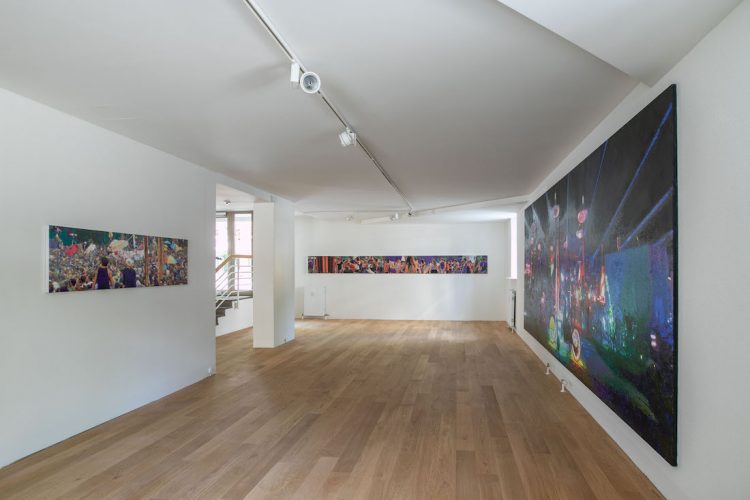